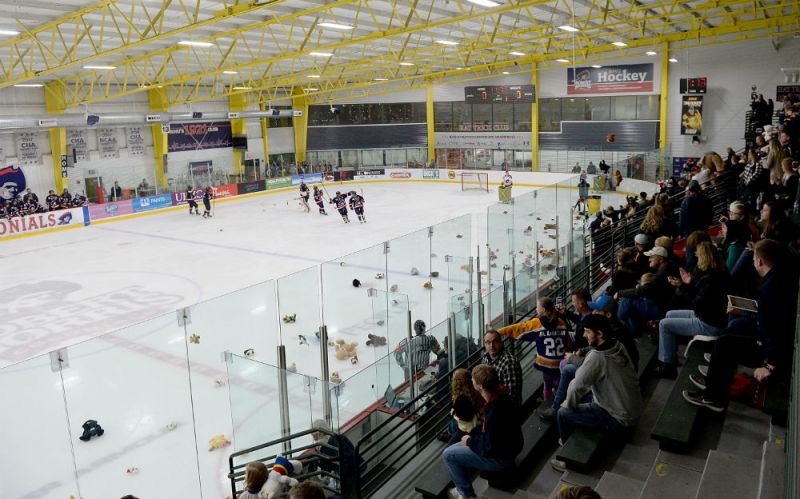 Fans of the Robert Morris women’s hockey team celebrate a goal by throwing teddy bears and stuffed animals on the ice for the team’s third annual Teddy Bear Toss game. Stuffed animals and proceeds from the event went to the Autism Society of Pittsburgh. (Justin Berl/RMU Athletics)

The first time the Robert Morris women’s hockey team held its annual Teddy Bear Toss game in 2016-17, it took a while for the bears to all rain down. The Colonials were held off the board until the third period.

“Stress like crazy” is what defender Maggie LaGue remembers from that game.

This year’s edition of the event wasn’t quite as nerve-wracking. Senior captain Amber Rennie tipped in a shot about 8:30 into the first period to send hundreds of bears to the ice. The stuffed animals, and funds raised during the game, all benefited the Autism Society of Pittsburgh, an organization with the objective of “[improving] the lives of those with autism and related disorders of behavior and communication.”

While a lot of college athletic events are organized by the schools and athletics department staff, the Colonials’ women’s hockey team has a cool tradition going. Since its inception three seasons ago, the responsibility of organizing the Teddy Bear Toss falls on the senior class, with players tasked with spreading the word and coordinating with the beneficiaries of the event. LaGue, a senior captain, was the point person for this year’s Teddy Bear Toss game.

“It’s a great project and I think they gain not only experience in terms of doing this sort of thing, but they also gain the appreciation for what they’ve done, and where this money and where these teddy bears can actually benefit people,” Robert Morris head coach Paul Colontino said.

For the first two years, the Colonials’ Teddy Bear Toss benefited the UPMC Children’s Hospital of Pittsburgh, specifically patients within the pediatric oncology department. LaGue and her fellow seniors decided to change things up this year by getting the Autism Society of Pittsburgh involved.

“For me personally, I have several family members that are affected by autism, and it’s something that’s been near and dear to my heart,” LaGue said. “Whoever it goes to, absolutely they benefit from it. It was kind of spur in the moment; I always kind of wanted to do something like that, especially for people with autism, so just having this opportunity to do it, it just seemed like the right thing to do.”

When she reached out to the Autism Society of Pittsburgh, she said that as huge hockey fans, they were “100% on board” with participating in the Teddy Bear Toss. For that reason, LaGue wanted to involve them in the game’s festivities, too. Mary Ellen Greacen, the Director of Operations at the Autism Society of Pittsburgh, and her son, Alec, who is on the autism spectrum, participated in the ceremonial puck drop before the game.

“I definitely wanted Mary Ellen to be involved just because she does so much with that organization; she really runs the show over there,” LaGue said. “And she told me that she has a son that’s affected by autism and that he’s a huge hockey fan, so it just seemed like it was meant to be, that they were there.

“I saw Mary Ellen and her son after and they were just the sweetest people…just meeting them and seeing in person that they are going to get the proceeds and donations, and just that they’re so grateful really made it special.” 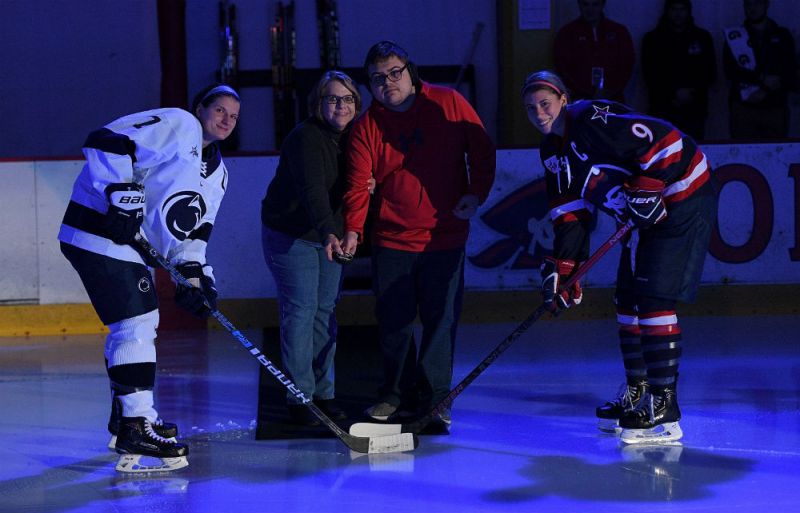 LaGue credited her fellow seniors and teammates for helping to organize the Teddy Bear Toss, calling it a team effort. While they certainly had the support of the Robert Morris coaching staff, the fact that the event is almost completely in the hands of the players is by design.

“We always say if we can teach a few life lessons through sport, we’re ahead of the game,” Colontino said. “Because for the people that are organizing this event, which is our seniors…in one more year, their hockey careers for the most part will be over with. And their focus will be on jobs, life, family—all kind of real-world issues. So to be able to get this kind of experience their last year I think is just a huge benefit and it goes a long way.”

When LaGue decided on Robert Morris as a college recruit, she said she was looking for a school that wasn’t too far from her home state of Vermont, but with enough space that she could “do her own thing”. The opportunity to take charge of the Teddy Bear Toss and give back to the community is just one way she’s carved out some space of her own as a leader since coming to campus.

“We do a big sister, little sister program with the [Pittsburgh Penguins Elite] teams, and we’ve been doing that for I want to say maybe four or five years now,” she said. “From the beginning that kind of sets the tone of, we’re a team that gets involved and we enjoy doing it and it’s a program that we love. And then getting involved in some side projects, too, is something that we take really seriously and we want to make an impact. Our school is very small and really athlete-focused so being able to take that and do what we can to give back to other programs is something that we really enjoy doing.”

LaGue is majoring in finance, with a minor in accounting. She’s also involved with the Colonial Leadership Academy, a student life organization that’s made up of student-athletes at Robert Morris.

Colontino said that LaGue’s handling of the Teddy Bear Toss just exemplifies the kind of leader that she is for the Colonials. She’s the type of player who plays hard no matter the circumstances, never offering up excuses and leading by example for the rest of her team.

“When you look at Maggie and what she does on the ice and what she does off the ice, you can’t help but be inspired to do the right thing,” he said. “First and foremost, she’s just a fantastic person. She’s got great character, great values, great moral ethics. She’s one of our captains for obviously those reasons.

“When you look at some of the things she does off the ice like [the Teddy Bear Toss], she’s a very busy person with school and hockey, yet she still finds time for events such as this.”

For LaGue personally, the Teddy Bear Toss was a big game. Along with watching her hard work and planning come to fruition, she hit a historic milestone on the ice. With two helpers on the night, she tied Thea Imbrogno, ’14, for second all-time in assists in program history. She has since passed Imbrogno to take sole possession of second place in the Robert Morris history books.

“She understands the game extremely well, and when you understand the game and you can fit the pieces together both five-on-five and on the power play, it puts you in a very good position,” Colontino said. “Her vision on the ice I’d put up with the best out there. She just knows where people are, she sees people, and she handles the situation extremely well. With all those things considered, yeah, it’s no doubt she achieved that milestone.”

LaGue credits her teammates for finishing off so many plays over the years, but the accomplishment is also a testament to her ability to get involved in the offense all four years with the Colonials.

“For me, I try to be pretty calm, cool and collected, and just try to be as consistent as possible with knowing when to jump into plays but also knowing when to play sound defense,” she said. “It’s definitely something that I’ve learned throughout the years. For me, it starts at practice and trying to do my best with every drill, and try to set that example for everybody else, especially the younger girls, of just relaxing. I sometimes like to dance on the bench and in the locker room and just have a good time. Just playing loose but not too loose is what our coach says, but just enjoying it because it does fly by.”

She’s not the only big-time contributor on the back-end for Robert Morris. The Colonials have almost an embarrassment of riches as far as two-way defenders go. LaGue is fourth on the team with 15 points, but she’s also blocked 56 shots. Sophomore Emily Curlett is right behind her with 11 points, and leads the team with 94 blocks. Senior Kirsten Welsh, the reigning College Hockey America Defender of the Year, rounds out the top six in scoring  on the squad with 10 points.

“We always kind of meet up as a group and talk about the opponents coming up and just get together so we’re all on the same page, and I think that’s really helpful,” LaGue said of the team’s defensive corps. “[We focus on] just playing our game, because when we play our game everybody else feeds off of that. I think doing that and doing it to the best of our abilities, and being efficient and effective has led to a lot of our offensive successes as a D corps and as a team.”

The Colonials won last year’s CHA regular season championship but were eliminated in the conference postseason tournament by eventual champion Mercyhurst. LaGue’s favorite memory with Robert Morris was winning the CHA Tournament back in 2017. Sitting in first place in the conference standings once again, it’s a feat the team would like to repeat again this year.

“The one thing we know and the one thing we’ve learned for sure, the most important thing is team chemistry; we’ve got to have a team that likes being a team and is willing to work together and understands their roles both on and off the ice,” Colontino said. “Maggie’s a big part of making sure that our team is internally connected and I think when you have that, like I said, you’re really able to accomplish anything. So for us, that’s the biggest thing. And then after that it just gets into systems, where we need to be healthy and we need to know what we’re doing in all key situations. If we can do that, we’re going to put ourselves in a great position to win.”