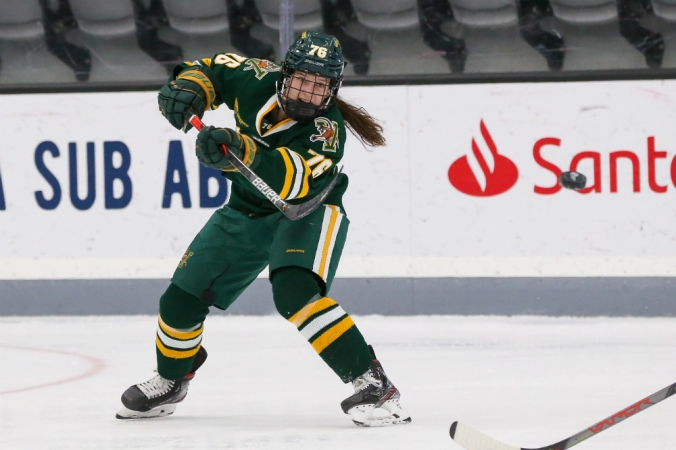 Maude Poulin-Labelle switched between the two positions multiple times before settling in and starring on Vermont’s blue line. She offers a slightly different take on it.

“As a D, I feel like the puck always comes to you,” said Poulin-Labelle. “As a forward, you’re always running after the puck.

“As a D, when I get [the puck], then the forwards are coming on me. I see the whole play. That’s why I prefer playing defense.”

She’s a highly skilled, speedy player who thrives with the puck on her stick, and those traits have led her to a breakout sophomore season for the Catamounts, exploding as one of the NCAA’s most productive defensive players.

Before starting her career at UVM, Poulin-Labelle made the switch between positions a couple of times. First, she went from playing defense to forward for a season at Stanstead College, in Stanstead, Quebec. It was a nonchalant move at the time. Her team was down a forward and she’s always been an offensive-minded D, so she stepped in. After a strong showing, her coach asked if she wanted to keep playing forward and make it a permanent change.

She was originally recruited as a forward by Vermont, but later on in her Stanstead career, at another tournament, the team once again needed a player—this time on the blue line. Poulin-Labelle again stepped in, and showed so much promise that the coaching staff thought she should switch back.

Vermont head coach Jim Plumer still remembers when Sarah Vaillancourt, the head coach at Stanstead, called him to say she thought Poulin-Labelle would be even better as a defender, and should make the move back to the blue line. Both coaches knew that needed to happen sooner rather than later.

“The great thing about Sarah and, you know, I don’t want to speak to whether all coaches would do this, but she wanted to do what was best for the kid for the long term,” Plumer said. “I think sometimes people are just like, ‘Well, I need to win and this kid can score me goals, so I’m going to play her as a forward.’ She knew that Maude was going to be a defenseman in college, and she needed to play as a defenseman. So that’s really how it happened. We originally committed her as a forward and then were happy to have her as a D.”

As a freshman, Poulin-Labelle’s keen offensive instincts translated immediately. Plumer said that from the get-go, it was clear she was one of the most skilled players on the roster, and one of the fastest skaters, too. However, she had some adjustments to make to succeed at the college level, and to round out her own game.

“She tried to do a lot herself last year,” Plumer said. “The difference this year that’s been phenomenal to see, and that’s making her so effective, is that she’s playing a team game. Instead of trying to rush the puck and beat everybody herself, she dishes the puck off, and what do you know, she gets it back. And she’s trusting other people and playing within the structure of our team, and it’s allowing her skill to really come out.”

Poulin-Labelle said that as a rookie, she needed to adjust to the faster pace of Hockey East play, and get a better grasp of her responsibilities on the defensive side of the puck. With a full season under her belt and a summer spent working on the details, she’s taken major strides in both areas, while improving her offensive game as well.

“Sometimes, I would go too much [on] offense, and something bad would happen,” she said. “Now,  I would say I’m defense first, on the D side and stuff. And then when I see an opportunity to go and help my offense, I go. If I see a player changing or not backchecking, it’s often there that I help, from the rush and stuff. I try to take my opportunities when the other teams are making mistakes.”

So far, it’s paying dividends for both Poulin-Labelle and the Catamounts. Plumer estimates that she’s averaging over 28 minutes a game for the squad this year. Already, she’s totaled more points than all of last season, with seven goals and seven assists. She ranks fourth nationally in scoring by a defender, and second in goals.

“There’s D that are effective by standing at the blue line and blasting away offensively, but this is a kid who jumps into the play on the rush,” Plumer said. “She can make a breakout pass and in two strides, she’s ahead of the puck. Not that we love that, and not that she does that all the time, but she has a good instinct to join the rush.”

Though she’s only a sophomore, Poulin-Labelle already owns a line in UVM’s record books. She became the first defender in program history to score a hat trick in a 4-2 win against Dartmouth on Oct. 29.

While developing into a more well-rounded player has surely helped her have more success on the ice, she hasn’t lost her propensity for taking chances and making more unconventional plays.

“[My coaches] are always saying ‘Maude doing Maude things’ when I do something odd,” she said. “I’m not a hundred percent sure what they mean, but I think just that I’m doing odd stuff that most people wouldn’t do when I play.”

Poulin-Labelle got started playing hockey when she was three years old. Technically, kids in her hometown weren’t supposed to start playing until age four, but she went with her dad when her older brother and sister were getting registered, and wouldn’t be told no.

As gifted as Poulin-Labelle looks on the ice these days at Gutterson Fieldhouse, she says it wasn’t always like that. When she tried out for her second season, her dad didn’t think she’d make the A team.

“I made the team, and the coach told my dad why, and the only reason was because I was working hard,” she said. “I think that was funny, but it also represents a little bit of my career. Because I started, I would say, not the best,  but then I always work hard and I got better.”

Vermont’s had a good amount of success this year on the defensive end of things, thanks largely to the strides Poulin-Labelle has made. Her classmate, Finnish defender Sini Karjalainen, is also making a major impact. Karjalainen leads Vermont with 15 points, but fits more of a defensive defender mold.

“Sini is another kid that can just eat minutes,” Plumer said. “[She’s] become a really good quarterback distributor of the puck. She’s a really good passer. She’s got a good amount of her points on the power play, feeding Maude or Theresa Schafzahl, or just making smart plays to keep the puck moving.”

Poulin-Labelle and Karjalainen don’t typically play together as a pairing, but they do spend a lot of time together on the power play. Together, they’ve helped the Catamounts’ unit score at a 25.9% clip this year, which ranks first in Hockey East.

“It’s just fun to be part of such a good D corps and with Sini, it’s really fun,” Poulin-Labelle said. “I think we inspired each other because she was really a defensive D and I was an offensive D last year, and I really improved my defense side. And I think she took really big strides forward towards being more offensive. I think we learn from each other and that’s really nice.”

So far, UVM has posted a 5-3-5 record (2-3-3 in Hockey East). One of those losses was a 3-2 setback against Boston College, which Plumer said was probably the best game they’ve played against the Eagles in his eight-year tenure.

Poulin-Labelle is one of many players bringing renewed energy to the team this season, helping the Catamounts to a promising start.

“It’s easy to coach her, and just easy to see her passion for the game,” Plumer said. “Her and her roommate [Theresa Schafzahl] and a few of her classmates and most of the rest of our team will stay out until they get kicked off the ice. It’s a great thing for a coach to see how much they love to be out there.”