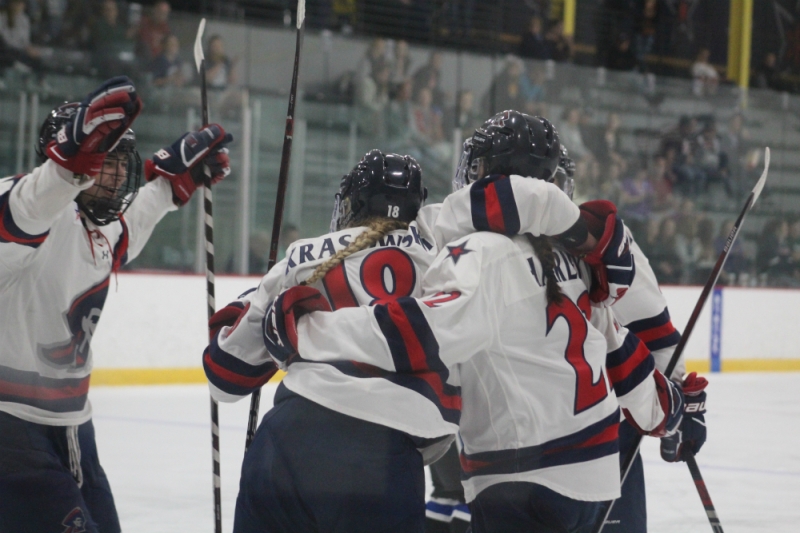 Robert Morris will play Syracuse on Friday afternoon for the College Hockey America title and an automatic bid into the NCAA Tournament. (Sara Beth Johnson/RMU Athletics)

With plenty of scenarios still possible for the NCAA Tournament, we head into a huge conference championship weekend in women’s college hockey. Here’s At Even Strength’s breakdown of each semifinal series in the ECAC, Hockey East, and WCHA, plus the College Hockey America championship game this afternoon.

The Orange and the Colonials will face off after two close ones in the semifinals on Thursday. Robert Morris got by Penn State, 2-1, off an early third period goal, and Syracuse finished off Mercyhurst, 4-3, late in the third in the second semifinal. The Colonials’ defense is a clear advantage; I don’t think the Orange will have as much success winning battles against Maggie LaGue, Wasyn Rice, Emily Curlett, and Kirsten Welsh as they did against the Lakers’ D on Thursday. Syracuse has done a good job of drawing penalties in this tournament, and they’ve scored eight goals in the last two games total, so RMU will want to stay disciplined to avoid any extra offensive opportunities for the Orange.

Players to watch: Syracuse senior D Lindsay Eastwood had a monster game against Mercyhurst in the semifinal, netting a hat trick and completely swinging momentum for the Orange with her final two goals. Senior forward Amber Rennie looked good in the semifinal game for Robert Morris, tacking on a goal to give her 13 on the season.

This is one of the most intriguing matchups across the board this weekend. The Tigers slipped up badly at the end of the season, losing control of first in the ECAC and dropping down to fourth, but they played Cornell really well in both of their games this season. The second game was a 5-0 Princeton win at Lynah Rink, and there’s no way the Big Red were happy at all with how that game went. This one should be much tighter, with Princeton regaining some confidence back after sweeping St. Lawrence last week, and  Cornell looking to grab their first win of the season against their rival.

Players to watch: The line of Carly Bullock, Sarah Fillier, and Maggie Connors got back to its usual business in last week’s quarterfinal series, and they’ve shown a clear ability to win battles against Cornell’s top D pairings this season. On the flip side, Micah Zandee-Hart and Kendra Nealey become an even more important unit for the Big Red. Those two, along with Jaime Bourbonnais and Willow Slobodzian, will need to dictate the tone defensively and get pucks out of the zone before they become grade-A chances.

Sarah Fillier – her fourth goal of the weekend – and she is Making Patty Proudhttps://t.co/x6aJzy7ITY pic.twitter.com/z3zaldFNAd

Last year’s ECAC co-champions and national championship game participants meet for a semifinal rematch in this year’s tournament. They’ve both been a bit up and down this season, perhaps somewhat surprisingly, but the Raiders have really hit their stride over the second half of the season. A strong offense, led by Jessie Eldridge’s phenomenal senior campaign, has them back on track going into a critical weekend. The Golden Knights have also settled in as the season’s gone on, and their top line is firing on all cylinders right now. While Clarkson is probably deeper defensively, both teams are comfortable making plays and creating good chances, so this should be a fun one to watch.

Players to watch: It would be good for the Raiders to get a little more out of the line of Coralie Larose, Rosalie Demers, and Bailey Larson so that secondary scoring doesn’t become an issue. Olivia Zafuto was really good in last week’s series against Harvard, but she’s likely to see a ton of time against Clarkson’s Loren Gabel, Elizabeth Giguère, and Michaela Pejzlová. Those individual matchups will be huge in determining this game’s winner.

Despite being the low seed, the Bulldogs have played the Gophers tough all year, and with their top-nine depth they stand a better chance than most teams at an upset. Minnesota is the most well-rounded team in the country, though, and nobody is getting more out of all four lines than the Gophers. It wouldn’t surprise me to see Minnesota shut down things down here, but it also wouldn’t be a surprise to see something like a 4-3 or 5-4 final with the heat that both teams bring in their forward groups.

Players to watch: The Bulldogs have a lot of young players in big roles,  including on defense. That inexperience has led to some issues at times, but rookie defender Maggie Flaherty has really raised her game over the last few weeks. She’ll be really important for the Bulldogs in terms of setting the tone with poise and not letting Minnesota’s forwards push right through the blue line. For the Gophers, Amy and Sarah Potomak seem ready to make some noise this weekend. Amy, a rookie, has three goals and five assists in her last five games, and Sarah has four goals and seven assists in her last seven.

Sarah Potomak ties the game for the #Gophers 2-2. pic.twitter.com/yKUigqXl0G

Well, we haven’t had to wait long for Wisconsin to meet Ohio State again after the Buckeyes tied them twice in the last week of the regular season. The two points lost in the ensuing shootouts cost the Badgers the regular season title, which makes this semifinal game all the more intense for both teams. The Buckeyes have had a good amount of success this season when it comes to keeping Wisconsin from scoring often, so the key for the Badgers will be to challenge Ohio State goaltender Andrea Brändli with more grade-A chances.

Players to watch: A big piece of Ohio State’s upset hopes rides on the shoulders of Brändli in net. Tatum Skaggs could also make a big impact if this game stays tight. She’s fourth on the team with 25 points but first for the Buckeyes with 16 goals. For Wisconsin, Abby Roque leads the team with 29 assists and is always a big part of what the Badgers do offensively. If she gets her linemates some really good looks, they stand a good chance of getting more challenging shots on net.

So can we discuss how filthy this goal from @TatumSkaggs was last night? 🤯#GoBucks pic.twitter.com/zpp0pC4F3O

After playing the underdog role last year, the Huskies are now a heavy favorite to win this matchup and advance to the Hockey East championship game. The Friars will have their hands full handling Northeastern’s dynamic offense, but in their last meeting they showed they can control it to an extent. Providence has a good chance at winning if they can make things tough on Northeastern’s elite D, led by Brooke Hobson and Skylar Fontaine, which is way easier said than done. For Northeastern, solid goaltending from Aerin Frankel will help out immensely, as well as converting on their power play and lengthy shifts in the offensive zone.

Players to watch: Rookie forward Sara Hjalmarsson has been a really good find for the Friars so far, and she’s become a key scorer for the team already. Defender Codie Cross adds quite a bit of depth to Northeastern’s defense, and had a good series last weekend against Vermont to help the Huskies close out the quarterfinals.

Codie Cross gets her first goal of the year with a rocket on the power-play! It's 5-2 #HowlinHuskies! pic.twitter.com/9V0dNPyLv5

This is the first meeting between the two rivals since BU swept BC back in November. I think it’s safe to say we’re looking at two different teams now: a Boston College squad that has found some jam again offensively and a Boston University team that’s only gained confidence since. BU has a sneaky good top-four D, but what’s really led to the Terriers’ success this season is reliable secondary scoring. Boston College needs to get a few lines going to help stave off that secondary effort from the Terriers.

Players to watch: While Jesse Compher and Sammy Davis have garnered national attention for the Terriers behind standout offensive seasons, Nara Elia and Natasza Tarnowski are also key pieces up front. In that series earlier in the year, BU defender Abby Cook made a big impact on the power play, too. Rookie forward Kelly Browne is someone to keep an eye on for Boston College, and Makenna Newkirk is coming off of a four-point quarterfinal series.

🎥 We've retaken the lead here in the third thanks to Makenna Newkirk's 12th of the season!#WeAreBC #HockeyEast pic.twitter.com/kUozeES7ru