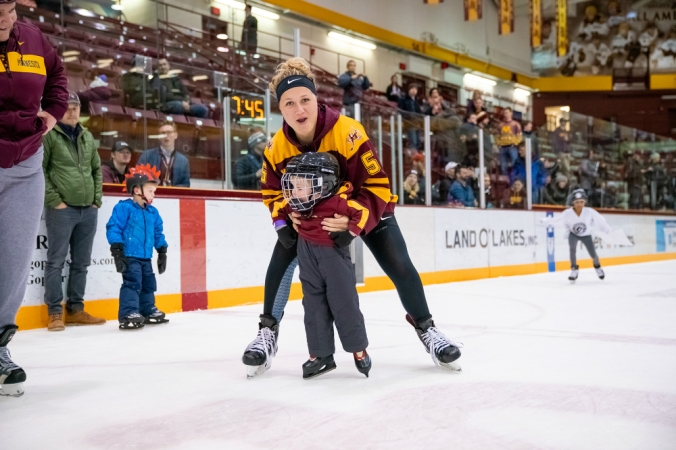 With National Girls and Women in Sports Day fast approaching on Feb. 6, Gopher Athletics has a weekend of celebration planned for six women’s sports events, including women’s hockey games.

While Minnesota’s athletics department has celebrated National Girls and Women in Sports Day in the past and taken part in the statewide initiative, this is the first year the school is offering a coordinated ticket package across multiple sports.

To gain some insight into the department’s National Girls and Women in Sports Day initiative, At Even Strength spoke to Mckenzie Lee, who works as a marketing coordinator in the athletics department. Lee has been heavily involved in planning the promotions and programming this year.

“We just wanted to come up with some ways to celebrate [our women’s teams] and provide some extra programming and incentives to get people to our venues to come watch,” she said. “The goal around that ticket package is, yes, to increase attendance and get people in the doors, but also to create some crossover. We have a lot of loyal fans; we have very loyal women’s hockey fans, we have loyal basketball fans, gymnastics fans, but we want to get them to go to the other events as well to see the entertainment and the great product on the floor at the other events, too.”

At Saturday’s gymnastics meet, the team will host a post-meet press conference for kids to ask questions of their favorite gymnasts. At Sunday’s women’s hockey game at Ridder, there will be a number of activities on the concourse for young fans to participate in, including a photo booth, inflatable hockey shot station, hopscotch, and a poster-making station. On the ice, the line-up buddies during player introductions, intermission games, and zamboni riders will all feature young girls. There will be a “girl power fan cam” on the video board throughout the game, as well as some student-athlete features in celebration of Black History Month.

Minnesota’s women’s sports teams are steeped in success; it’s no secret that women’s hockey is a powerhouse program, and the rest of their women’s squads traditionally perform well in the Big 10 and across the country. Women’s volleyball earned a No. 2 seed in the NCAA Tournament this past fall and advanced to the Sweet Sixteen. Women’s soccer entered the Big 10 Tournament as the No. 7 seed and won the whole thing. Women’s hockey is ranked No. 2 nationally and split the season series with No. 1-ranked Wisconsin. Women’s gymnastics is ranked No. 21 in the country.

Lee and her colleagues in the marketing department knew they wanted to showcase their women’s teams and all of their achievements, which is how the National Girls and Women in Sports Day initiative was born.

It’s hard to ignore, though, that women’s sports are all too often deemed “not worthy” of investment, whether it be actual dollars and time, or through efforts like marketing. This argument, and talk around generating revenue, typically comes up in the context of professional leagues, but also applies at the collegiate level, where athletics departments and schools are always looking to balance the budget and reduce expenses without eliminating opportunities to bring in dollars. Marketing and promotions for women’s athletic events are standard, but dedicated programming created exclusively around women’s teams is a bit more than that: it’s a deliberate investment.

It’s proven to be a sensible one, too. Lee noted that Minnesota’s women’s hockey team had a sold-out crowd of 3,400 people on hand when Wisconsin was in town two weeks ago.

“We couldn’t squeeze anybody else in,” she said. “I think that just speaks a lot to our coaches here, our athletics director here, and our programs here, and how much support that they have, how fans love it. So if fans love it, we’re going to keep doing it. We’re going to definitely support them and continue to grow the sport and grow the game for women.”

Lee has been with Gopher Athletics for a little less than two years. She has an event management background, and especially enjoys creating experiences that resonate with people long after they’ve left the building.

“I think this is a job that you can actually see the impact as we give our student-athletes a place to grow academically, personally, and professionally,” she said. “But it’s also cool to see the lifelong fans. A lot of the players, especially on our women’s hockey team, are Minnesotans, so they’ve been coming for years. It’s cool to know that maybe someday we’re hosting a 12-year-old in our venue that’s having a great experience and we’re a part of making that, and then someday she’s going to be on the ice.”