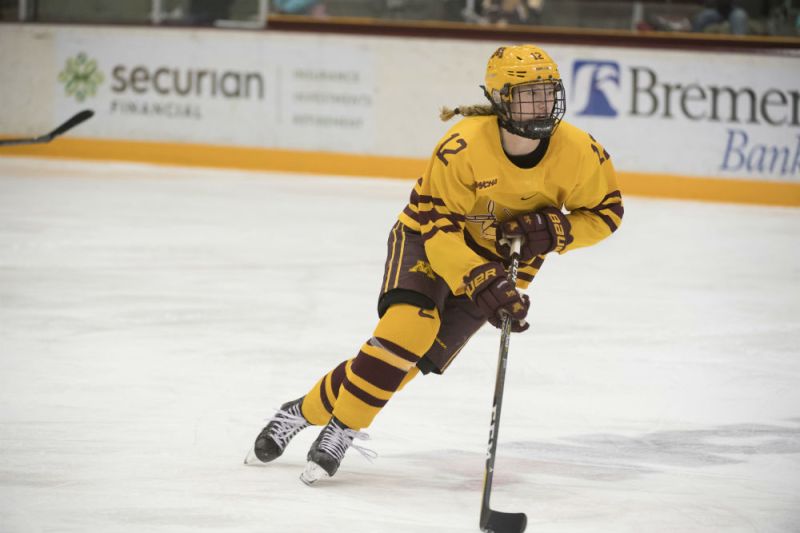 Minnesota forward Grace Zumwinkle will be a key player in this weekend’s series against the No. 1-ranked Wisconsin Badgers. (Craig Lassig/Gopher Athletics)

Games of the Week: Wisconsin at Minnesota

After dropping a game to Ohio State last weekend, Wisconsin continues its road stretch and takes its No. 1 ranking to Minneapolis for two huge games against the Gophers. In the WCHA standings, Minnesota has surpassed the Badgers by four points, but Wisconsin has two games in hand, and remains first in USCHO’s poll, the USA Today/USA Hockey Magazine poll, the SB Nation poll, and Title IX Hockey’s metric. The Gophers, of course, are No. 2 in all of those rankings.

Their seasons, to this point, appear to mirror each other in a lot of ways. Both teams have only lost two games—once to each other, and once to Ohio State. Throughout the rest of their schedules, they’ve had a few close calls and games that have gone to overtime, but they’ve withstood the pressure and come out on top. One area where they differ, though, is out-of-conference play. While the Gophers have cruised through most of their non-conference slate, the Badgers needed overtime twice to beat Harvard, and had one-goal victories against Princeton and Lindenwood.

Minnesota’s high-flying offense, which leads the nation in goals per game at 4.46, had trouble scoring against Wisconsin in the first Border Battle this year. The Gophers earned a 1-0 shutout in game one, but were held to just one goal again in a 4-1 loss. Alex Gulstene has seen the bulk of the action in net this year and has a respectable .923 save percentage to go along with a pristine 15-0-0 record, but I think Minnesota would rather give her and goalie partner Sydney Scobee some breathing room and get the offense more involved in this series. The Badgers, who are letting in a meager 1.18 goals per game, will obviously try to counter that and minimize the Gophers’ chances.

For the Badgers, Annie Pankowski and Sophie Shirley have made for a good one-two punch as far as scoring goals. Abby Roque leads the team in points but has thrived more as a set-up woman, with 21 assists to go along with six tallies. Roque also does an excellent job in the face-off circle, with 209 wins for a 58.4 winning percentage; that’s usually a key area of the game for teams fighting for possession, so her success there will undoubtedly be helpful to the Badgers. Sophomore Grace Zumwinkle has really picked up the pace lately, with five goals in her last four games to give her 18 on the season, good for third nationally. But she was held off the scoresheet in the first series with Wisconsin; Minnesota will look for her to make more of an impact this time around.

Northeastern vs. UConn (home-and-home): This series features Hockey East’s No. 1 team going against its fifth-ranked squad. These teams have not faced each other yet this year, so this will be the first rematch of last year’s Hockey East Tournament championship, which saw NU defeat UConn by a score of 2-1. I don’t think we’ll be in for a low-scoring game this weekend, though. Both teams average more than 30 shots on goal per game, and Northeastern’s offense never seems to go quiet for long. UConn is not shy about getting chances from dangerous areas, and leading scorer Natalie Snodgrass is on quite the hot streak with nine goals and 10 points in her last five games.

Mercyhurst at Rochester Institute of Technology: The Tigers are currently riding a three-game winning streak, though facing Mercyhurst presents their biggest challenge since playing Boston University back in December, a series in which they were outscored 11-1. The Tigers are currently holding down the third seed in the CHA standings, so an upset this weekend would help them steal valuable conference points. Solving RIT goaltender Terra Lanteigne will probably pose the biggest challenge this weekend for the Lakers; she carries a .938 save percentage into the series, despite facing more shots than anybody in the country (747). Mercyhurst beat Colgate, 8-5, in a barn-burner last time out, flexing its offensive abilities and snapping a four-game winless streak—all to non-conference opponents. I think the Lakers will be glad at the chance to keep the ship upright and moving forward this weekend in CHA play.

Minnesota State at Bemidji State: The Mavericks and Beavers will square off in the great outdoors on Saturday, taking part in Hockey Day Minnesota with a game set right on Lake Bemidji. The fanfare around the outdoor game should make it a fun one to watch, but it’s a meaningful one for both teams, too. The Beavers lost their first 10 games of the season (two of those were against Minnesota State, including one in the shootout) but are 5-3 in conference play since then, with wins over Ohio State, St. Cloud State, and Minnesota Duluth. The Mavericks are unfortunately in the middle of a sizable slide; they’re winless in their last seven games, all against WCHA teams. Those trends combined would seem to point to a win for Bemidji State but I think we’ll see an inspired effort from the Mavericks in this one.