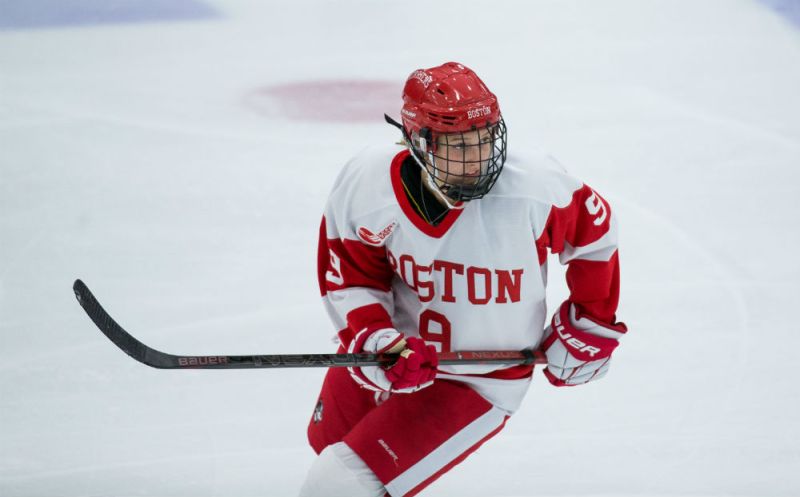 There were quite a few underdog performances to note from last weekend in NCAA Division I women’s hockey play. Defending national champion Clarkson fell to Colgate and Cornell. Previously winless Holy Cross upended Northeastern, snapping the No. 5 team in the country’s 12-game unbeaten streak.

It might not have been a historic pair of wins, but it was a statement nonetheless for the Terriers, who finished below the .500 mark last season for the first time in a decade. They were slated to finish fifth in the Hockey East preseason coaches’ poll this year, while their crosstown rivals garnered nine of 10 first-place votes.

BU held a 4-4-4 record going into the weekend, but knocked off the Eagles with a 3-2 win on Friday and a 4-2 win on Saturday. Goaltending was huge; Kate Stuart and Corinne Schroeder made a combined 79 saves to stave off BC’s offense. But the Terriers’ special teams were in excellent form, too. All three of their goals on Friday were scored on the power play, and they chipped in two more power-play goals in the second game.

Defender Abby Cook was responsible for both on Saturday. She scored twice in a seven-minute span on nearly identical plays: well-screened one-timed shots from the point.

“I think we were moving the puck well and Sammy [Davis] was really drawing the defender towards her up top, so that really opened up the lane for me, which was huge,” Cook said. “I think Nara [Elia] on one and Mackenna [Parker] on the other were screening the goalie really well so that helped.”

Her first goal tied the game for the Terriers, and the second gave them a critical lead, which they held onto for the rest of the game.

BU’s penalty kill also came up big in the series. The Eagles took a 1-0 lead on the power play in game two, but that was the only power-play goal the Terriers would give up, killing off nine other chances on the weekend.

Boston University has had a few down years—they haven’t made the NCAA Tournament since 2014-15, which isn’t quite up to the lofty standards of a program that finished as national runner-ups twice in a three-year span. But BU is always motivated to play Boston College. Even in the midst of a subpar year last season, the Terriers took the Eagles to overtime in the Beanpot final. In the team’s first meeting this season, BU kept it a one-goal game in the 4-3 loss.

“Going into those games, we’re always really excited and we know that we have to work really hard,” Cook said. “We’re always up to the challenge.”

BU is led up front by sophomore Jesse Compher and junior Sammy Davis, who have 24 and 20 points this year, respectively. No other Terrier has reached double digits yet, so that’s quite a heavy burden for the duo to carry. But last weekend, they got some much-needed goal support from the rest of the line-up. Cook’s two markers from the blue line were key, and both Emma Wuthrich and Deziray De Sousa chipped in with their first goals of the season.

“That’s really exciting,” Cook said of those individual firsts. “We’ve been waiting for those goals to happen because then everyone gets really excited and we all start working really hard after that.”

Cook is no small contributor to this BU squad. The junior was named a Hockey East First Team All-Star and a New England Division I All-Star last season, finishing tied for 20th in scoring in Hockey East with 26 points and sixth in blocks with 66. This season, she has five goals and eight points, third-best on the team, while continuing to log big minutes.

As she takes on more of a leadership role this year, her game plan is pretty simple.

“I want to have a bigger voice on the team and just [be] someone that the younger girls can look up to,” Cook said. “I just want to work really hard and just do the best I can for my team.”

Last weekend’s sweep marks the first time the Terriers have won two games in a row against Boston College since a three-game win streak that spanned from Jan. 25 to Oct. 5, 2012. It also marks a pretty clear turnaround for a team that struggled in the first month or so of the season. BU started the year off with a 1-3-3 record, but since Nov. 9 the team is on a 5-1-1 run, with the lone loss coming against the Eagles.

That’s helped the team find a renewed sense of confidence.

“I think we always have high expectations for ourselves but we have been gaining confidence as the year is going on,” Cook said. “Just in practice and everything, you can tell we’re working a lot harder, and everyone’s really bought in right now so that’s helping with all those games. I think that’s a major difference right now.”

Robert Morris at Minnesota: The Gophers made fairly quick work of Mercyhurst at the beginning of the season, but we’ll see if the Lakers’ CHA counterparts can have more success in this series. Jaycee Gebhard continues her torrid scoring pace with 32 points this season, tied for the national lead. She’s done it all for Robert Morris; she’s the team’s leader in power-play goals (5 – also tied for the national lead), shots on goal (82), and faceoff wins (282 – again the national lead). As of now, in my mind, there’s nobody ahead of her in the Patty Kazmaier race, so we’ll see how the Gophers handle her. The challenge for the Colonials as a whole this weekend will be outscoring Minnesota, who’s currently punching in 4.22 goals per game. RMU has been fairly average in that respect—their 2.50 goals per game ranks 18th in the country—but they’re doing better in terms of actually generating offense, with 33.35 shots on goal per game, which ranks 10th.

Clarkson vs. St. Lawrence (home-and-home): After the chaos that was last weekend in NCAA Division I women’s hockey, the defending national champions are all of a sudden clamoring for a win. The Golden Knights lost to both Colgate and Cornell, but so did the Saints. Clarkson’s top line of Loren Gabel, Elizabeth Giguère, and Michaela Pejzlová potted one goal in each of last weekend’s games, and nobody else chipped in to bolster the offense. One key this weekend for Clarkson will be getting into a better offensive rhythm, with more contributors stepping up. St. Lawrence also needs to find some more offense, after scoring just one goal in two games last weekend. The Saints already took one from the Golden Knights earlier this year in overtime, but we’ll be seeing what I’d imagine to be a very motivated Clarkson squad now.

Boston College vs. Merrimack (home-and-home): The Warriors have enjoyed a good start to the 2018-19 season, but dropped two important Hockey East games to New Hampshire last weekend. They shouldn’t be taken lightly, though, and Boston College is obviously reeling a bit after last weekend’s series with BU. Merrimack is giving up the sixth-fewest goals per game in the country (1.65), and the Eagles failed to score more than twice in each game against the Terriers. What really killed Boston College against BU, though, was special teams, as noted in the above feature. The Terriers’ power play is clicking at just a 15.6% rate this season but scored five goals in two games against BC. The Eagles’ own power play was limited to one goal on 10 attempts. After falling out of the NCAA Tournament picture for the time being, they can’t afford any other slip-ups, no matter how badly they’re out-shooting teams. For a deeper dive into what’s ailing the Eagles this season, Grant Salzano of BC Interruption has a really nice write-up.