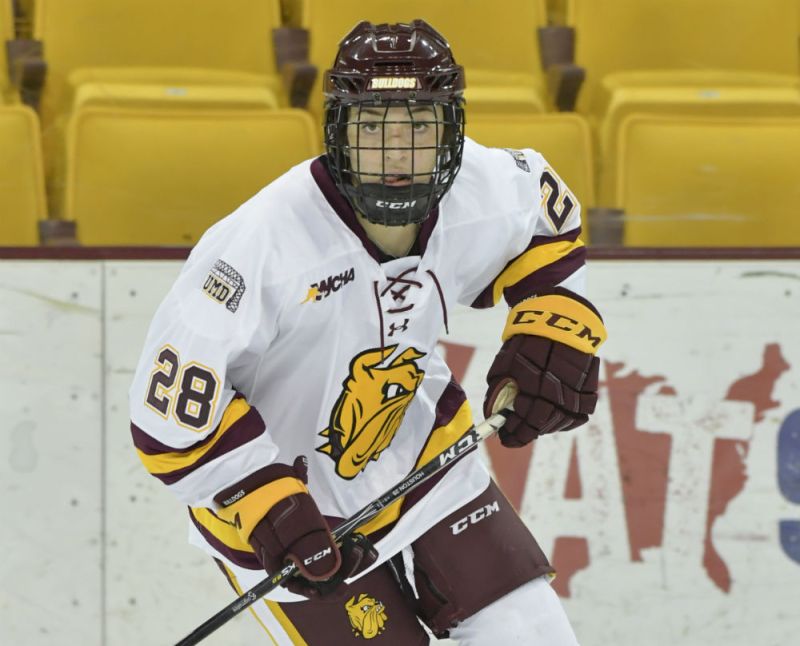 Games of the Week: Minnesota Duluth at Ohio State

This is shaping up to be a huge weekend for both teams, as they meet for the first time this year. Ohio State was swept by Bemidji State last weekend, so they’re in dire need of a rebound and can’t really afford another setback. Though we can typically expect some wacky results during 4 Nations, the Buckeyes weren’t missing anyone to that tournament. They’ll certainly be out to prove that last weekend was just a lapse. It’s not quite time to panic, and the Beavers are better than what their record has shown this year, but losing two games in a row to a previously winless team is not really in line with what Ohio State is aiming to achieve this year.

The Bulldogs have had a notably tough schedule to start the season, and this series against the Buckeyes won’t exactly be any easier. UMD has gotten some hard-fought results against Boston College and Minnesota already, so they should be more than capable of making this a competitive series. In their last outing, the Bulldogs put up 50 shots on goal, but were upset by St. Cloud State, 3-2. They won’t get that many this weekend, but if they can keep up with the Buckeyes’ offense and control a good bulk of possession, they’ll make things tough for OSU. Ohio State is currently third in the country (outside of the NEWHA) in shots on goal per game with 34.79, so a big part of UMD’s task will be breaking up some of that offensive flow and getting more chances of their own.

The goaltending battle between these two squads will be worth watching. Minnesota Duluth’s Maddie Rooney comes into the weekend with a .930 save percentage and a 2.33 goals-against average. Ohio State’s Andrea Brändli has a .934 save percentage and 2.01 GAA. Both have been huge factors in their teams’ success early this year, and with a nice amount of skill on both rosters, they’ll be counted on again in this series.

Other players to watch are Emma Maltais and Sydney Brodt. Maltais has been excellent for the Buckeyes this season, solidifying herself as a dominating offensive force with 21 points in 14 games (tied for first in the country). Brodt is having a solid year numbers-wise for the Bulldogs with a goal and six points in 10 games, and she enjoyed a great week at the 4 Nations Cup in Saskatoon, finishing the tournament with three goals and two assists.

Colgate/Cornell at Princeton: Colgate visits Hobey Baker Rink on Friday, and the Big Red follow suit on Saturday for two big ECAC match-ups. This is a big series for Princeton, who started off the season with two losses to Wisconsin but is undefeated in six games since then. With a successful weekend, the Tigers could show they’re a real competitor in the ECAC this year. Colgate has seen their fair share of struggle early this season, which is not surprising given the number of losses they had to graduation, but they’ve still got enough talent to cause trouble. Cornell looks like a team to beat in the conference and they’re getting a big boost with Kristin O’Neill’s return. Likewise, the Tigers will get freshman forward Sarah Fillier back from Team Canada as well, and she’s already shown she can be a top offensive player for her college team.

Clarkson/St. Lawrence at Brown: The Bears had what we could probably consider the biggest weekend in the program’s Division I history two weeks ago. They earned road wins over Cornell and Colgate, who were both ranked. Since USCHO began conducting polls in 2006-07, Brown hasn’t ever defeated two ranked opponents in the same year, let alone the same weekend. They couldn’t keep those winning ways going last weekend, though, as the Bears fell to RPI, 1-0, and tied Union, 2-2. Can they show a little more magic this weekend against Clarkson and St. Lawrence? It would take another major upset, but it’s something to keep an eye on.

Merrimack vs. Providence (home-and-home): Merrimack is off to an excellent start to the year, with a 9-1-2 record and notable wins over UConn and Maine. Their only loss was to Boston College, by a score of 3-1. Providence is also in really good shape, with an 8-2-0 record and a win over BC two weeks ago. The Warriors seem to have taken big strides this year; they’re giving up the fewest goals per game in the country, averaging 1.08. Katelyn Rae is having a big year, too—she’s tied for first in the nation with 10 goals. She’ll be going against Providence star forward Maureen Murphy, who’s seventh in the national scoring race with 16 points (nine goals, seven assists).

Bemidji State at Wisconsin: The Beavers waited quite a while for their first wins of the season, but they were pretty good ones, with a sweep over Ohio State at home last weekend. Goaltender Kerigan Dowhy finished with 38 saves in the opening 2-1 win, and then made 32 saves in a 4-2 win to close out the series. Bemidji State also got some meaningful contributions from Claire DeGeorge, Abby Halluska, and Haley Mack. Wisconsin has displayed a level of dominance that only one or two others teams have shown so far this year, however. The Badgers are outshooting their opponents by an average of 18.50 shots on goal per game. Their defense is solid, giving up just 17.50 shots on goal per game, and goalie Kristen Campbell is backing that up with a .932 save percentage. The Beavers will need to make the absolute most out of their chances to get a win this weekend.