Quinnipiac had an excellent start to the year, going undefeated until a 2-1 loss to Harvard on Dec. 6. Over that unbeaten stretch, the Bobcats were 13-0-3, and earned wins over Cornell, Princeton, and Clarkson twice, and tied St. Lawrence. The loss to the Crimson was a little bit of a sour way to end the year, but they picked it right back up, going on a seven-game win streak to start the 2015 calendar year, which featured wins against Princeton and a sweep over non-conference foe Robert Morris. 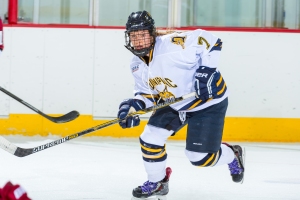 For the remainder of the regular season, however, the Bobcats did not post an above-.500 record, going 4-6-0 in their last 10 games. They beat Dartmouth, Colgate, Clarkson, and Brown, but fell to Boston University, Boston College, Harvard, Cornell, St. Lawrence, and Yale, and scored more than three goals only twice over that stretch. Quinnipiac backed into the postseason on that note, and responded with a big 7-0 victory over Princeton in game one of their ECAC quarterfinal series. They picked up the sweep in game two with a 2-0 win.

The Bobcats were ousted by Harvard in the next round in a 2-1 overtime loss, and met the Crimson again in the NCAA Tournament quarterfinals, falling decisively, 5-0. Besides that rout over the Tigers, Quinnipiac’s offense showed little life over the end of the season, and that proved to be a big problem for the team when it counted.

Still, the Bobcats had a lot to be proud of last season. Chelsea Laden set the school and conference records for shutouts with 16 on the season, and earned the Mandi Schwartz Student-Athlete of the Year Award from the ECAC as well as New England Division I All-Star honors. Laden was also named to the All-ECAC Second Team, while forward Nicole Kosta placed on the All-ECAC Third Team, and Taylar Cianfarano was an ECAC All-Rookie Selection.

Lachner attended three USA Hockey player development camps, where she earned all-star recognition. She also played in five state championships, winning two of them, and captured a bronze medal at the USA Hockey National Championship as well as a JWHL Challenge Cup title in 2013. Lachner was named the All-Star MVP Goaltender at the Bell Capital Cup and was a four-year assistant captain for her team.

Coach Turner on Lachner (via QuinnipiacBobcats.com):

“As a goaltender, Claire is quick, athletic, and competes on every shot. In the recruiting process, we were drawn to her self-evaluation and keen understanding of her position. She’s bright, articulate, and a conscientious worker. Her experience at the club levels has her prepared for the speed of the game, as well as to be fully aware of our expectations for goaltenders to battle on every shot and take pride in having responsibility for the game’s outcome.”

MacKenzie was an assistant captain for St. Mary’s (Manitoba) last season, and was named a Female World Sports School Challenge First Team All-Star in 2014-15, helping her team capture a bronze medal there.

Coach Turner on MacKenzie (via QuinnipiacBobcats.com):

“Every time we see Kate play, she continues to impress us. She’s a mobile, 5’9″ defenseman who demonstrates great poise and patience with the puck. She sees plays and finds teammates on the breakout, through the neutral zone, and from the offensive point. We love her instincts and puck skill, but most importantly, we love her attitude and commitment to get better every day. She’s incredibly coachable and is constantly working toward being ready to meet the challenges ahead. We’re excited to add her leadership and energy to a very strong defensive core.”

Samoskevich had an impressive showing at the 2015 IIHF Under-18 World Championships, helping the U.S. win gold while earning a spot for herself on the Media All-Star team for the tournament, scoring a tournament-leading six goals and finishing third with eight points. Last season, she was named the YouthOne Player of the Year as well as the All-USA Girls Hockey Player of the Year, and she has attended multiple USA Hockey camps from the U14 to the U18 level.

“Melissa comes to us after a tremendous senior year, ready to make an immediate impact on our program. In the past year, she has been named All-USA Girls National Player of the Year by USA Today, helped lead Team USA to the U18 World Championship, and pushed her prep team into the championship game at USA Hockey Nationals. However, beyond the accolades, we might be more excited about her development as a person and athlete in the past year. We’ve watched her grow as a leader, learn to attack each shift with an unrivaled intensity, and seen her firmly establish herself as one of the nation’s top young players. She’s fast, strong, and plays with great energy. We are very excited to bring Melissa back to her home state to join our continued quest to compete for championships.”

Like MacKenzie, Marcon was also an assistant captain with St. Mary’s, and won a bronze medal at the World Sport School Challenge with the team as well. She captained Team Manitoba at the 2015 Canada Winter Games, leading the team to a gold medal, and was an alternate for the club at the 2013 Canadian Women’s National Under-18 Championships.

Coach Turner on Marcon (via QuinnipiacBobcats.com):

“Randi is a physical, confident, and detailed hockey player. She wins face-offs, is tough to move in front of the net, and wins pucks in all three zones. We know she will confidently embody our “hard to play against” mindset after watching her excel for her school and representing Manitoba multiple times. Her willingness to use her size, battle, and fight hard each shift has us excited to see just how good she can become in this environment.”

With the Pittsburgh Penguins Elite club, Lancaster won district championships in 2012 and 2015. At the Berkshire School (Mass.), Lancaster was named the team’s MVP last season and led them to the Cushing Tournament championship, also earning the Jane Hayes Spirit Award for Sportsmanship in 2014.

Coach Turner on Lancaster (via QuinnipiacBobcats.com):

“Kenzie is a tremendous athlete who has been a leader on every team she has played. She has size, speed, and possesses great offensive instincts. Throughout the recruiting process, we were instantly drawn to her maturity, work ethic, and desire to get better every day. With limited hockey opportunities in North Carolina, she has taken a non-traditional route to college hockey. Along the way, she has shown an incredible commitment to the game and consistently seeks out new opportunities to challenge herself to become the best she can be.”

As an assistant captain with the PWHL’s Rivulettes, Lantz tallied 11 goals and 22 assists in the 2014-15 season. She skated for Team Ontario at the 2015 Canada Winter Games, winning a silver medal.

Coach Turner on Lantz (via QuinnipiacBobcats.com):

“Miranda has succeeded at every level of hockey she has played. She has won Provincial Championships at the lower levels, was a Top 15 scorer in the highly competitive PWHL, and earned the opportunity to represent Ontario at the Canada Winter Games this past year. Miranda has a high hockey IQ, reads plays well, and makes her teammates around her better. Her patience with the puck, discipline, and coachability will all be welcome additions to our program.” 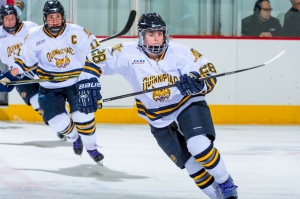 The Bobcats had a great start to the 2014-15 campaign, and looked dominant through the middle of the year, but seemingly hit a wall at some point during the second half. While their defense held strong for most of the season, they didn’t match up well against the top teams they played over the second half, and neither their offense or their goaltending looked very special against those teams. They’ll have some challenges this season as they look to replace their starting goaltender as well as some key veteran scorers, but perhaps the biggest thing that first-year head coach Cassandra Turner will be aiming for is a more consistent run throughout the entire year, and not just the first half.

Chelsea Laden and her single-season record 16 shutouts have graduated, leaving Quinnipiac’s crease bare to start the year. Junior Sydney Rossman, as the only returning goaltender, becomes the team’s likely go-to, and in limited action she has fared well so far during her career, with a .929 save percentage and 1.36 goals-against average in 14 games over three seasons (including two so far in 2015-16). Rossman has never handled starting duties before, however, so I would expect to see rookie Claire Lachner, as the only other netminder on the roster, get some playing time in this year as well. We haven’t seen much of Rossman, but Quinnipiac will hope that she is fully ready to step up and provide some reliability in net.

Not much changes for the Bobcats on the defensive end, barring the addition of rookie Kate MacKenzie. MacKenzie may challenge sophomore Alicia Barry for time in the sixth-defenseman slot, but with no losses to speak of, Quinnipiac’s blue line is pretty much set heading into the year. Senior Cydney Roesler is their cornerstone player and a strong two-way D, and classmate Kristen Tamberg will help her run things; the two tied for the defensive scoring lead last year with 13 points. Juniors Taryn Baumgardt and Emma Greco and senior Lindsey West give them quite a bit of depth on the back end and can chip in production-wise every so often. With the option of either Barry or MacKenzie as well, the Bobcats shouldn’t have a problem icing three good defensive pairings.

The Bobcats will be losing three forwards who scored at or near 20 points last season in Shiann Darkangelo, Erica Uden Johansson, and Morgan Fritz-Ward. But they’re still returning several good pieces, such as Taylar Cianfarano, who led the team with 17 goals and 30 points as a rookie in 2014-15. Nicole Connery and Nicole Kosta also return for their senior seasons, and both can have an impact in primary scoring roles. Junior Emma Woods could also take a step forward after scoring 24 points last season, and senior Nicole Brown has proven to be a good supporting player. Quinnipiac will be adding a blue-chip prospect in Melissa Samoskevich, and she should contribute to the top-six immediately. Classmates Randi Marcon and Miranda Lantz likely won’t have the same impact right away, but both have decent ceilings and the skill to chip in for the team.

There is a pretty clear question mark in goal that is going to have to be addressed, but with consistency on the blue line, Rossman should be able to get comfortable in net. That defensive corps is likely going to be the key to the Bobcats’ success again; they were third in the country last year in scoring defense with just 1.18 goals allowed per game, and ranked first in shots against per game with 16.92. While their offense was efficient for the most part, it wasn’t very dynamic, and they struggled much more against the top teams they faced. Quinnipiac will hope for the young but extremely talented duo of Cianfarano and Samoskevich to make more of an impact in that area. There are good pieces in place for the Bobcats, but they come into the season with a lot to prove, especially when it comes to avoiding another collapse down the stretch.